“Fiery.” “Daring.” “One of the most original floral designs at FleurAmour.” These are just a few of the many reactions on the #FreestyleFreesia installation at FleurAmour 2018. Kristel van Dijk and Roos van Unen, commissioned by Flower Factor and main sponsor the Royal FloraHolland growers of Fabulous Freesia, showed their interpretation of the theme ‘Urban Roots’ in the ‘Kleine Kelder’. Combining the #FreestyleFreesia movement, which was initiated by Flower Factor last year, with their own ideas, the two young floral design talents created a sensational display with the Freesia playing the lead role. 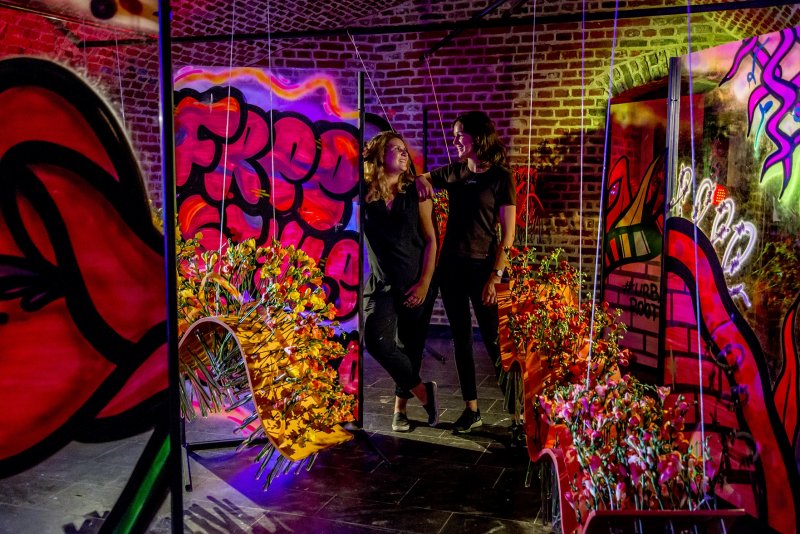 They combined floral design with other art forms such as street art graffiti and spoken word, which was recited in English as well as Dutch. The link with the theme ‘Urban Roots’ and the multiple artforms seemed a logical choice and most suitable to the new image of the Freesia. Roos van Unen: “The bright colours, its expressive character and the rebellious element fit the Freesia perfectly. Forget oldfashioned, #FreestyleFreesia!”

A play of moving and flowing shapes, combined with colours, fragrance and a poem stimulating your imagination was the result. While the fragrance of 2.000 wonderful Freesias lured you through the Castle of Alden Biesen to the ‘Kleine Kelder’, you were guided through the room by a voice. The visitor would be transported to a world filled with experiences playing at the senses: smell, vision, sound, but above all, reflection. Both literally as well as figuratively by means of mirrors and questions posed in the poem such as “Who are you?” bringing the visitor to a halt, getting them to reflect on what they were experiencing at that moment, but also in their daily life.

[…]
– Hey, who are you?
You take so many selfies, but do you really look at yourself?
Not to fix your hair, or to straighten your clothes, but to see who is there.
– Hey, who are you?
Are you who you want to be? Which road do you take? In this city. On this planet.
Shake the shackles of the machine,
The noise of ever ongoing life,
Which is not lived.
Improvise,
Freestyle without fear,
Freestyle
[…]

Roos and Kristel are pleased with the end result. The main goal was to enchant visitors with their Freesia installation. Judging to the many positive responses they succeeded.