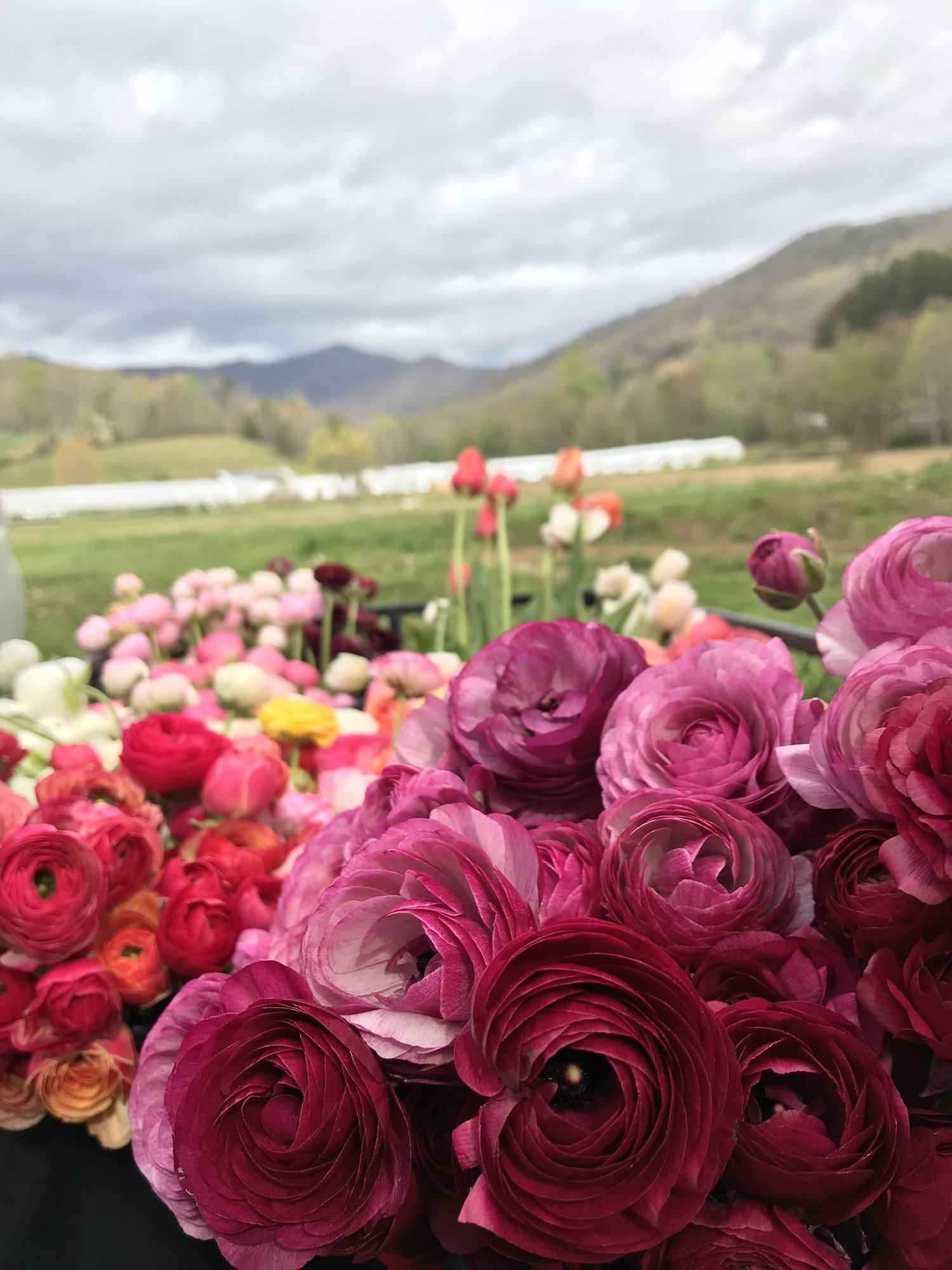 The Foundation: Prepping the Soil + Laying Out Fields

Knowing that we wanted to begin planing at the new farm early in 2018, with a goal of fully moving the farming operation by mid-summer, the preparations began long before breaking ground. We planted all of our fall crops like ranunculus, tulips, anemone and cool flowers like snapdragons, bupleurum and foxglove at the old farm in Candler where we’ve been farming for the past several years. I initially hoped to fall plant (2017) at the new farm, but accepted the fact that this would mean rushing through soil prep and rushing typically leads to mistakes or poor overall quality. So I made the decision to fall plant at the old farm and to begin planting on our new land for the 2018 calendar year.

Last July I had a soil test completed through the NC Extension Office and discovered that the soil had a slightly low pH (very standard for Western North Carolina). After mapping out the field locations, which entailed lots of measuring and remeasuring, I slowly begin breaking ground with our new tractor. After finally accomplishing a loamy tilled field, I applied the recommend amount of lime to balance the pH levels as well as some organic fertilizer (also applied based on recommendations from the soil report). I incorporated this into the soil and then sowed a cover crop mixture of oats, winter peas and rye. While ideally all of our fields would be the same dimensions, that is just not practical for the shape of our farm – I’m trying to maximize every foot of flat ground so we have 4 fields of different sizes.

Once the soil warmed and dried out enough, I tilled under the cover crop and the fields were ready to go for spring planting. We laid landscape fabric and began tucking plants into the ground. We do not direct sow any seeds because of the high weed/grass pressure. Typically lay drip tape for irrigation under the landscape fabric, however this year we will lay it on top of the fabric once it becomes necessary to irrigate. We’ve had more than enough rain so far and do not have a well on the property yet (or a road for that matter), so that was something that I have chosen to figure out only when it becomes necessary. We can irrigate out of the creek that borders the fields if/when things dry out.

We knew that deer pressure would likely be high because there’s a large herd of whitetail deer living in the woods around our farm. So rather than waiting to find out if they would be interested in our flowers (we knew they would be), we installed a deer fence before planting. After much research, it seemed like an electric 3D baited fence would be the way to go. The folks at Premier 1 Supply helped us figure out exactly what we needed and we installed it over one weekend. So far so good on the deer, now if only the fence kept out turkeys too…