Oxygen is essential for healthy plant development. Although plants generate oxygen as a by-product during photosynthesis, they require oxygen for energy production during the night. Also, the roots of a plant require oxygen for proper development, and bacteria in the rhizosphere use oxygen to transfer nitrogen into plant-available nitrate and ammonia. In the soil, roots obtain their oxygen from the air that is present in pockets between the soil particles, but in hydroponic systems, oxygen levels may rapidly drop below the required level of 8 mg/l (Figure 1).

Under extreme low-oxygen anaerobic conditions, bacteria start to generate energy by the oxidation of nitrate into nitrite, especially at a low pH. When nitrite accumulates in the substrate, this can quickly reach levels that are toxic to the plant. Plants that are exposed to dangerous levels of nitrite show root browning, leaf wilting, and impaired growth. Growth inhibition particularly occurs at low pH levels: the lower the pH of the irrigation water, the higher the growth restriction. It is therefore important to prevent anaerobic conditions by maintaining sufficient oxygen levels at the root zone.

Intra Hydro pure is a unique silver-stabilized disinfectant based on hydrogen peroxide that slowly decomposes after reaction in water and oxygen. Next to effective water disinfection, this paper shows that the addition of Intra Hydro pure to irrigation water increases the dissolved oxygen concentration to a stable level that keeps plants healthy.

At a commercial Gerbera grower, the irrigation water from six different drippers was sampled five times in a time period of 14 months (Figure 4). These measurements clearly demonstrate that a higher amount of Intra Hydro pure in the irrigation water correlates with a higher level of dissolved oxygen. 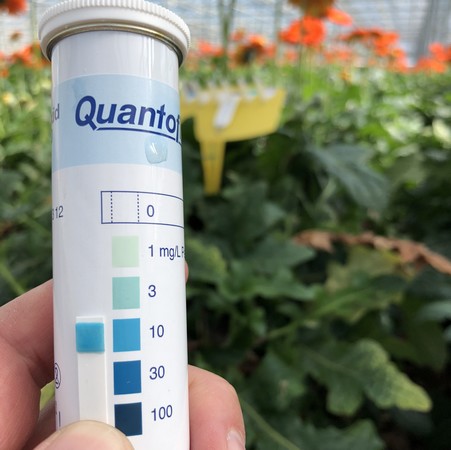