Mother’s Day: then and now

adminLeave a Comment on Mother’s Day: then and nowPosted in Daily Florals

Before Mother’s Day became a major annual event in every florist’s calendar, it was a very different kind of celebration. Motherhood had long been celebrated going back as far as the ancient Greeks and Romans, but it was the early Christians who first began celebrating ‘Mothering Sunday’.

Florists in the United States, however, can thank Anna Jarvis for campaigning for Mother’s Day to be recognized as an official holiday. The very first Mother’s Day was held on the 2nd Sunday in May 1908 in Grafton, West Virginia, as a way of honoring the sacrifices Mothers made for their children. As popularity for the holiday grew, many more cities, churches and States began celebrating Mother’s Day, until finally in 1914, President Woodrow Wilson officially designated the second Sunday in May as Mother’s Day. 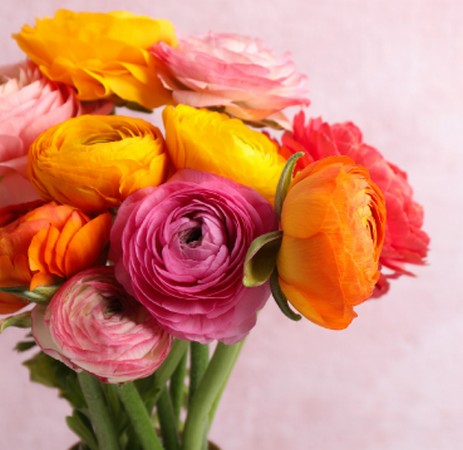 Ranuculus
So now that you know a bit more about the origin of Mother’s Day, let’s talk about flowers! There is no better way to show your Mom how much you care for her than by giving her a beautiful bouquet of flowers. So, how about choosing flowers that are as elegant and delicate as she is, such as the pretty Ranunculus?

With their profusion of tissue thin petals, Ranunculus make a fabulous addition to any Mother’s Day bouquet. Because they are available in so many colors, they are incredibly versatile and can be classy and elegant, bright and cheery, or pretty and pastel depending on the look you are seeking.

Ranunculus stems tend to be naturally bendy. They rarely grow straight, which adds to their natural aesthetic. But they can be quite delicate as they are hollow. You may find it easier to hold these flowers upside down when handling to prevent breakage. Their delicate nature means they can look small or wilted upon arrival, but with proper hydration and care, they will soon regain their shape and vibrancy.

It’s no surprise that Ranunculus are so popular though, as they belong to the star-studded flower family, Ranunculaceae! Other members of this family include Delphinium & Larkspur which are popular cut flowers, and garden favorites such as Clematis, Nigella, Hellebore, Aquilegia, Thalictrum, Trollius & Aconites.