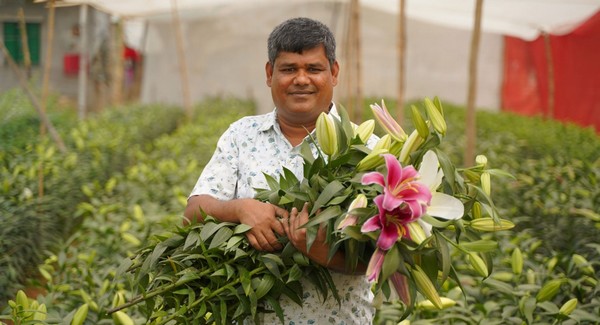 Entrepreneur couple Delwar Hossain and Shelly Hossain from Gazipur’s Sreepur upazila had surprised the countrymen by cultivating tulips. Crowds flocked to their farm to see the tulips, while many government officials and even the ministers visited his tulip field. Recently, he has started lily cultivation.

Flowers are usually marketed during the bud stage and the cost and profit of cultivating oriental lilies is much higher than the other flowers, Delwar said. So he is significantly increasing the flower cultivation little by little. Although white, yellow, orange, pink, red, and purple lilies are found in the world, Delwar has so far produced only two colors of the flower. Oriental lilies in white and pink. Lily trees are a bit hard and tall like the tuberose. Delwar and Shelly are hoping to sell flowers worth Tk 12 lakh (USD 14150), produced from 12 decimals of land. I was really surprised to hear this from Delwar. He assured with a calm voice, “Oriental lily is the most expensive flower and it has plenty of demand across the country.” Delwar is selling each stick for Tk 120 to Tk 200 (USD 1.41 to USD 2.36) and in that regard, 10 thousand plants would give him the desired amount of profit. They had to invest Tk 70 (USD 0.83) on each stick. If the cost could have been reduced the profit could go even higher, said Delwar.

The main cost is related to importing bulbs. Each bulb requires an additional Tk 5 (USD 0.06) as a quarantine fee and another 10 percent tax during import. Still, Delwar certainly believes lily has great prospects in Bangladesh and this could bring great profits to many if the government gives their attention to this upcoming booming sector of floriculture.

Read the complete article at www.thedailystar.net.