adminLeave a Comment on Leaf-curling plum aphid: a pest to watchPosted in Daily Florals 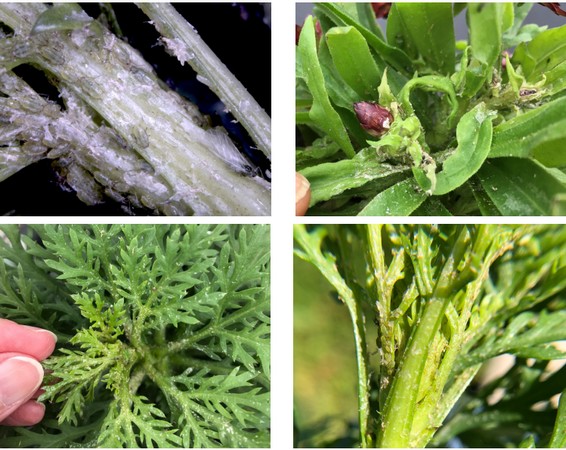 Aphids are pests that are typically considered and discussed as a group, but in greenhouse production occasionally a species distinguishes itself. The leaf-curling plum aphid, Brachycaudus helichrysi, is one of those. The e-gro team recently encountered it on Bracteantha (strawflower) causing distortion and stunting of new growth, not something one expects from more the commonly seen green peach and melon aphids. It was also found at the same time on Argyranthemum though without much if any of the distortion. Aphids are not often seen on these plants, though that may be changing with their increasing popularity and trend towards vegetative propagation. The infestation was also unusual for the white, filmy honeydew residue they left behind. And unlike some other aphids this one seems entirely focused upon new terminal growth and flower buds.

There is no coincidence it was found on two related plants, as those in the daisy (Asteraceae or Compositae) family comprise their usual summer hosts.  Some forms of this aphid are also reported from red clover, but it is hard to say whether this one would go to that host – some strains of aphids can be quite particular. Leaf-curling plum aphid derives its name from its overwintering host, plants in the genus Prunus (plum, cherry, peach), where they’re a spring pest causing severe curling of new leaves before departing for summer hosts. (In California it is reported a serious pest of plums).

It is not sure if our particular aphids have this kind of complete (holocyclic) life cycle, dependent upon both the overwintering (Prunus) and summer (Asteraceae) hosts. Some leaf-curling plum aphid populations are different and apparently no longer require the winter hosts, surviving only as a greenhouse pest on the herbaceous plants like Bracteantha, Argyranthemum and chrysanthemums.

Read the complete article at www.e-gro.org.