The reputation of the progressive potted plant company now extends far beyond its own sector. The company supplies heat to a school, a sports centre, homes and fellow growers in the immediate vicinity. 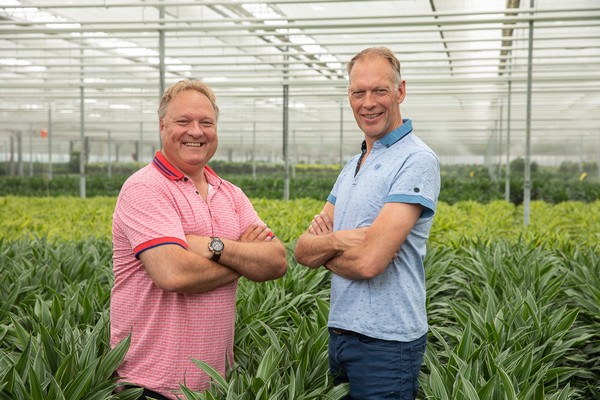 Innovation and sustainability go hand in hand with the brothers Menno (right in the photo) and Leon Ammerlaan (left). This corporate vision earned them the prestigious EZK Energy Award at the beginning of this year. “Greenhouse horticulture can help the Netherlands to become more sustainable,” says Leon Ammerlaan firmly.

Compliments and teething problems
As part of World Earth Day, on Thursday 22 April, the climate is literally and figuratively put in the spotlight. Ammerlaan TGI knows all about this. As a forerunner, it has received numerous compliments over the past ten years for the sustainable course the company is taking, but it has also experienced the impact (and damage) of teething troubles.

That has not hindered Leon Ammerlaan in his ambitions. But looking at the major energy transition – which both companies and consumers will have to realise in the coming years – he is realistic: “The idealists are in the minority. For both entrepreneurs and individuals, money is the most important motivation to support this transition, you have to be honest about that. But the same consumer, on the other hand, increasingly demands sustainable products. A wish that is translated to our customers. In this way, sustainability will eventually become a “license to produce”, including for growers. “

Powerful clusters
Particularly in the field of energy, considerable progress is being made in sustainability in greenhouse horticulture. Partly under the impulse of Kas als Energiebron, the innovation and action program of the Ministry of Agriculture, Nature and Food Quality and Greenhouse Horticulture Netherlands. Initiatives that the Netherlands can benefit from. “Every greenhouse horticulture area in our country has drawn up a RES, a regional energy strategy. It describes plans varying from geothermal projects and solar panels, to solar boilers and wind energy.

Therein lies the basis for heating homes with energy from greenhouse horticulture and that is the future of the sector. This requires that powerful clusters are formed. This is already getting off the ground through growers’ heat cooperatives. Residential centres must be realised in these clusters, because heat transport is expensive and energy is lost during each conversion. The closer to the source the better. Clusters can also work together in different areas, which is really a win-win situation for greenhouse horticulture. ”

Director
The ideas are there, the possibilities are increasing, but it is still going too slowly, says Leon Ammerlaan. “The heat roundabout has been talked about for years in this region. Now things are finally getting started. The first hot water is to flow through the pipeline in 2024, but that too will take another three years. Only when the main structure is in place can the heat infrastructure be realized and the clusters can be connected, with input from the heat cooperatives.”

The role of the director and especially who will fulfil that function will become essential. “In my opinion, this is a task for greenhouse horticulture and not for the energy companies. As a sector, we have to make agreements about the complex transition we are facing together.”

According to Leon Ammerlaan, this complexity consists of the combination of older and newer energy sources. “There is solar and wind too, but in my opinion we are not going to get rid of gas completely. The gas-fired CHP from greenhouse horticulture is a beautiful and sustainable way to generate energy. Moreover, it is a stable factor in the sometimes erratic supply of green energy. And if we only use 5% of the current amount of gas, we can continue to move forward in a sustainable way for years to come.”

Motivation
In politics and the media, 2030 and 2040 are mentioned as benchmarks of the energy transition and the global climate agreement. According to Leon Ammerlaan, it is still uncertain whether greenhouse horticulture and the Netherlands will achieve those objectives. “Efficiency, changing legislation, rising energy prices and subsidies jointly determine the speed of change. In my opinion, that is a greater motivation than ideals for many companies. However, it is important in achieving the objectives that the front runners continue, but the rest of the squad does not give up.”

In the meantime, Ammerlaan TGI has opted for the pioneering role. The company operates CO2-neutral, has a positive position in the market, works constructively with the municipality and province and sees that strategy rewarded by important entrepreneurial awards. “Greenhouse horticulture can take significant steps in the field of sustainability and can become an energy supplier, where we have been known as a large-scale consumer for many years. The step-by-step plan for the coming years is clear: saving energy is step 1, then sustainability will come. As greenhouse horticulture, we can play an important role in that step. Not individually, but as a powerful collective. ”