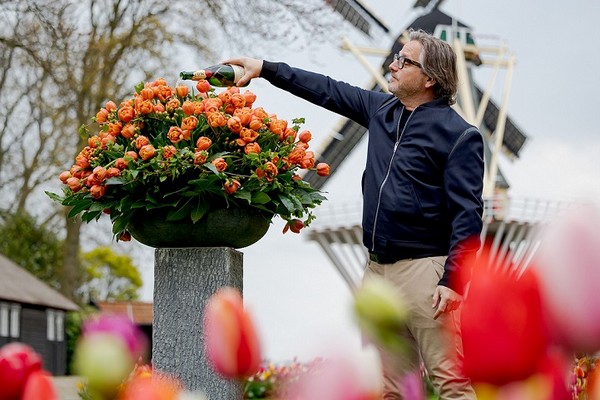 As part of his 25th anniversary, singer, lyricist and composer Guus Meeuwis baptized his own tulip in Keukenhof on Friday 30 April. The singer, in his own words, accidentally entered the artistic profession in 1995, but 25 years and more than 50 stadium concerts later, it is impossible to imagine the Dutch music sphere without him. Having his own tulip fits well with his impressive career.

Guus was clear in advance about the colour of the tulip: a blue or an orange, matching the colors for his anniversary tour that was planned for 2020. It became an orange double tulip. “This is an impressive tulip,” says Guus. “It is an honour to have a tulip named.”

Keukenhof was allowed to open to visitors for a limited number of days in 2021 as part of Testen voor Toegang (Testing for Access). “We are the national and international showcase for floriculture,” says director Bart Siemerink. “We are now showing the flower park to the world in different ways. Via videos, television programs and also via this tulip baptizing. ”

The tulip was grown by grower Maveridge International from St. Maarten.