In some countries, a mesh is a part of the basic equipment used in a greenhouse, but in the Netherlands, this is not the case. However, this trend is changing as of late, as Marcel Schulte and Maarten, van Hagen of Holland Gaas have noticed. Recently, two large chrysanthemum growers – Linflowers (new greenhouse of 7.1 hectares) and U-grand (new greenhouse of 10 hectares) – have chosen to use mesh, and there is a lot more interest in the mesh besides the two examples given. 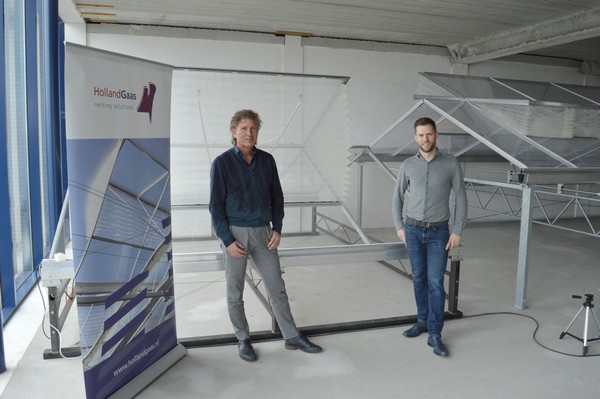 “Basically, the time has passed by the main arguments against using mesh”, says both Marcel and Maarten, “and that’s because of two reasons. On the one hand, the usage of chemicals isn’t allowed to the same extent it once was. Instead of spraying in the greenhouse against unwanted visitors, recent strategies are more often aimed at preventing them from entering in the first place. This was already happening in biology, and those are natural enemies that you want to keep inside. Secondly, Het Nieuwe Telen (HNT) has taken to new heights, which in practice means that the windows in the greenhouse are opened less often. The screens are used intensely and with a higher humidity people can now cultivate with a higher indoor temperature.”

Inside and outside
Using mesh has been the standard for seed breeders for many years now. Plant growers followed this trend soon after, and recently more and more production growers have followed their example. For example, the interest in mesh in tomato cultivation has increased since the arrival of ToBRFV, Maarten notices. “Nothing is allowed to get into the greenhouses anymore, but birds and bees can just fly in through the windows. That makes you think.” A similar thought can be noticed throughout the horticultural sector, but another aspect comes into play within the ornamental sector. “Their greenhouses are never completely empty for something like a great cleaning. This is why the insects that are inside are not easily removed. Because of that, mesh in things like rose cultivation is not unusual.”

A rise in floriculture
If not in the chrysanthemum cultivation. Holland Gaas might have done a variety of different projects in the past, among which one at Kester Tuinbouw back in 2003 – which was, reportedly, to their complete satisfaction -, but they were still just exceptions. Until now, because besides the previously mentioned growers and variety of tests – among which one at Denim Flowers and The Perfect Chrysanthemum in Delphy’s greenhouse – the advantages of mesh are noticed more and more. “Contributing to this are new insights in cultivation. For instance, a grower wants to be able to air their cultivation, but, given the conditions in the Netherlands, the maximum amount of air time for the growers would still only be a few weeks a year. Oftentimes, occasional airing is enough, and let’s say you have 20% ventilation reduction and want to open the windows about 50%, then you can also increase this to 70%.”

Existing or new greenhouses
Depending on the situation and the chosen mesh opening size, people can choose for larger or even more windows for airing for new greenhouses. Ventilation loss is a non-issue in this case. However, when it comes to existing greenhouses, installers often note that the capacity of the windows is not utilized to the fullest because the windows can’t open all the way, which is, of course, a waste of airing capacity but often is easily fixed by adjusting the system settings.

System application
“We have yet to encountered a greenhouse in which it wasn’t possible to install a mesh system. Our engineers, together with greenhouse builders, system suppliers, and/or own installers, always found ways to design profiles that made it possible to install the mesh systems”, says Marcel. “At times, people wonder if such a system would perhaps be too heavy for the construction, but this has also never been an issue during an installation.”

Accordion
Holland Gaas can call itself the inventor of the current accordion system and, over the years, has finetuned this system. People have also made production more professional and uniform over time. A constant mesh opening is, for instance, essential when it comes to keeping out a certain insect. Thanks to improvements made to the polyester wire, the mesh has also become a more sustainable product overall. On the third floor of the office building, the company is constantly researching firmness, weather resistance, wear, diffusivity, flexibility, and a whole lot more to end up with the best possible product. Many of the implemented improvements have been developed and extensively tested right here.